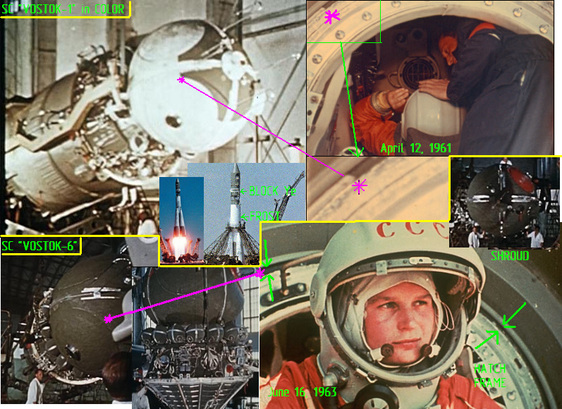 Time and time again there has been debate on forums as to how the Vostok truthfully appeared, and out of a populist movement, the “Silver” group usually wins.  “The Voskhods and military Zenits were silver” the populists say in their evidence. The model community willingly follows as silver is an attractive color.

In reality, however, Vostok-1’s Descent Module or Sharik was a dull white honey-comb or soccer-ball pattern with an army-green  “cap” near the paperclip style aerials on top of the sphere. Even those that are correct about the white color often forget or ignore this “cap”. At the time of the final pair of flights the appearance had changed to the Descent Modules appearing entirely dull army-green. In the pictures red is a color indicator for technicians to  “Remove Before Flight” and other sources must be used to determine the color of the red preflight components in flight. The entrance hatch was a silver metallic color.

With regard to color as of May 2012 – there IS NOT ONE ACCURATE painting, computer painting,  animation or model of the spacecraft Vostok on the internet. Only a small handful of photos are accurate if the viewer knows what to look for in the pictures.

The most truthful rendition is in the photograph of Revell’s model kit box (the modern versions) with the caveats that: 1) This is only known to be accurate for Vostok-1 only during the approximately 5 minutes the spacecraft was attached to the final stage of the R7 booster (the block Ye Stage), 2) The green cap is not shown on top of the descent module. 3) The cylindrical side in reality is  grey, but it is still depicted as white on the box.

While we are on the subject of color, the rest of the body of the R7 rocket is closer to grey than green as depicted in almost every online or printed picture today.  The photos shift to the green due to a vintage photochemical process and lighting conditions. Many times white and grey or green and white hybrids appear without the understanding that the white color was from frost - that was often shaken loose in the first seconds after liftoff.

Evidence of the color scheme I have proposed as the truth is shown by hatchway photos where a small perhaps 1or 2 cm view of the descent modules exterior can be seen between the open Hatch and the shroud.

Vostok 2, 3, and 4, look like Vostok-1 Earlier spacecraft in this series (3KA №1 and 2) may have lacked the green insulation cap. We must await further photographic evidence in this case. Pilot-Cosmonaut A.A. Leonov that the Vostok spacecraft were "mostly white". This can be interpreted that they were mostly white (with the rest of the spacecraft a different color) or that he bases this on a single spacecraft that he saw that was mostly white (with a green cap). Either way it is true. Vostok-5 looked like Vostok-6. With thorough examination of the shroud and hatch sill, including a specific ding in the silver insulation near one of the bolts that hold the hatch we can see this is the spacecraft Vostok-5. Follow the line from the bolt that appears about half an inch over over Valeriy Bykovskiy's right shoulder to the ding in the silver and follow that line out to the darker rivet mark where the contour of the shroud sharply angles away from the hatch. Then trace this same line in the small photo - the ding here is only a pixel or two wide.

Cue Card in Vostok-5 and Vostok-6
Inside the Spacecrafts "Vostok-5" and "Vostok-6" there was a permanently affixed cue card on the right side wall. It served as a memory aide for cosmonauts entrance in and exit from the spacecraft. 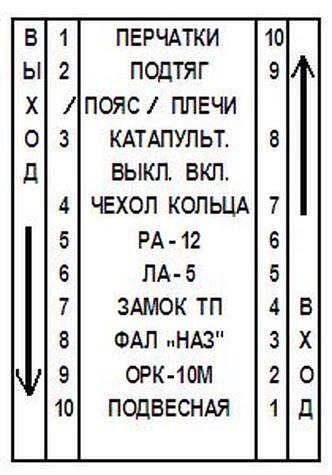