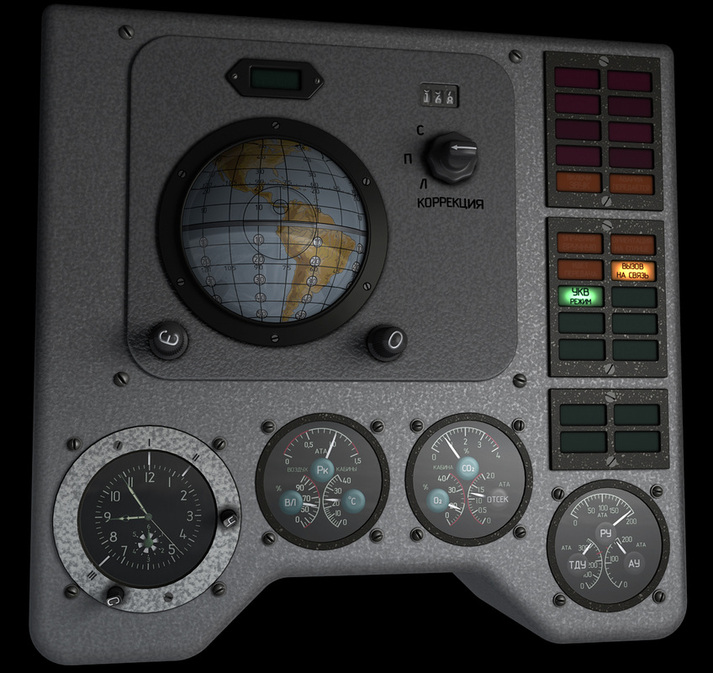 Above: The first accurate 3D rendition of the instrument panel of Yuri Alekseyevich Gagarin on April 12, 1961. Credit: Konstanin Guryanov of www.gagarin3d.ru 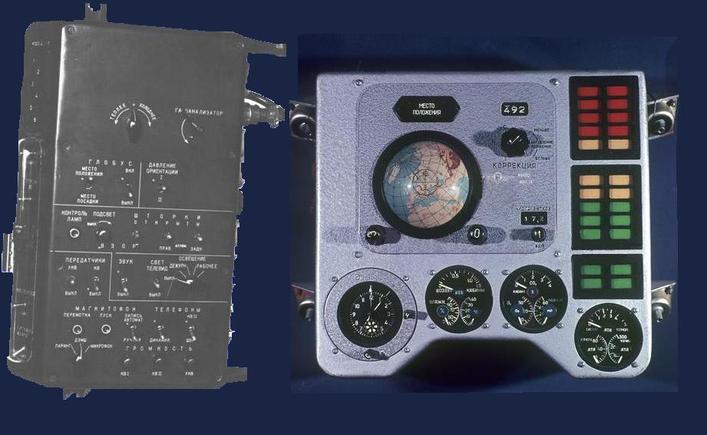 The Control Panel for a Vostok (left) sits beside an Instrument panel (Right). This Instrument Panel minus the Signal Table markings appeared at the Institute of Economic Acheivements in Moscow in 1967. Oddly, the middle three part gauge has "Radiation" as a parameter.
Below: The 3B-17 radio as flown in Vostok allowed cosmonauts to hear terrestrial broadcasts. This particular model was also flown on the Spacecraft "Soyuz" in the orbital module. Created by: Konstantin Guryanov www.gagarin3d.ru

Introduction: Уважаемые коллеги. Dear Colleagues,
This page examines the Control and Display system of the Spacecraft “Vostok” Космического Корабля «Восток» as flown from April 12, 1961 to June 19, 1963 on six human piloted missions. The displays and controls of the Spacecraft “Vostok” were mostly located on two panels in the spacecraft.   There are two main panels of the spacecraft "Vostok" are known as the System of Indication and Signalization-1-3KA (СИС-1-3КА - система 1 индикации и сигнализации). Here 3КА or 3А* was the internal designation for the human rated Vostok. The black panel on the left side of the cabin (and the left in the above picture) is known as the Control Panel (ПУ - Пульт управления) and the panel in the upper center of the cabin (right side of the picture) is known as the Instrument Panel (ПД - приборная доска). In addition there is a controller for manual orientation (РУ - ручка управления) or attitude control and several other controls not in this picture that are part of the overall system in the Right Side Controls (See Below).

*often as объект 3А or even «объект 3КА»
Control: All functions of control of the Spacecraft Vostok were performed in one of three ways:
1) Directly by the Cosmonaut.
2) By Automatic Timer Mechanisms such the Program-Timer-Unit “Granite” and barometrically initiated relays, environmental system relays, and an analog computer for solar guided orientation.
3) By Command Radio Link (Командная Радиолиния «МРВ-ВС – БКРЛ-В») as initiated by ground stations.   See the first section under the Ground Support tab.

Here, we shall focus on the first way. In general, the cosmonaut had control over voice communications and tape recorder (Магнитофон), manual orientation and the associated optical device “Vzor” ВЗОР, the globe display, emergency retrofire, nominal and contingency ejection initiations, cabin lighting, circulation fan, and emergency oxygen. The majority of these controls were on the control panel on the left side of the cabin.

Right Hand Side Controls:It is notable there was a short wave broadcast radio receiver in the cabin a 3B-17 *radio receiver (ЗБ-17 широковещательный радиоприемник –ШВРП) built by the Moscow Radio Institute (НИИ-695 МНИИРС) as a component of the Zarya (Заря) radio system.

Just above the radio is a large circuit breaker was for arming the ejection seat catapult a.k.a the “armchair” (кресло пилота КП-В-ЗА) labeled Permission Catapult or Ejection (РАЗРЕШЕНИЕ КАТАП.) and End or Shutdown the Catapult  or Ejection (ОТБОЙ КАТАПУЛТЬТИР.) Oddly, this breaker is not currently in Yuri Gagarin's Vostok-1 at the Energia Museum.
To the right of the radio and orientation controller were depending on the spacecraft, 2 or 3 **additional circuit levers speculated to turn on and off rotation on three individual axis (Roll, Pitch, Yaw)or alternatively opening and closing valves of nitrogen gas for the orientation system (notice the crossfeeds on the attitude control system scheme under this Tab).

Additional controls for experiments could be placed in this area. On Vostok-5 a switch to activate a Spectrometer (СПЕКТРОМЕТР) and an enigmatic S-08 (С-08) switch were placed.

Displays and Indicators:  With regard to indication we have 25 signal lights, 3 gauges each with 3 dial indicators (one dial on one gauge could display two states – so 10 indications total), a clockwork globe, and two clocks, one of which had a special system of indication for the automated descent program progression. The gauges displayed environmental conditions of the cabin and pressures of the attitude system tanks and retrorocket. The majority of the displays were located on the instrument panel.

The Instrument panel connects to the rest of the ship via three plugs on the left side of the panel. The plug for the Globe device has 19 pins in the IMP-3 version. Two other larger plugs below this one connect to the gauges, clock, and signal devices. There are four main components of the instrument panel. These are:

1. Globe Device - IMP (глобус) more formally known as the Indicator of Place in Flight or Place of Landing (ИМП-индикатор места положения и местапосадки). It is notable here that the Latitude/Longitude indicator sometimes pictured above the Globe was not present on flights of the “Vostok”, but was used on the flights of the spacecraft "Voshod" (Восход).  Two switches on the control panel on the left control this device - one is the on/off function, the other switches the device between displaying the place in flight and the place of landing. When the place in flight is selected a green light above the globe labeled "Place in Flight" (МЕСТАПОЛОЖЕНИЯ) is illuminated in green.  Two adjustment knobs below the globe labeled O and Ae (О, Э) changed the position of the globe. Ae changed the position in the equatorial plane and O changed the position within the orbital plane., a three digit orbit counter in the lower right section of the globe section labeled «ЧИСЛО ВИТКОВ» and a correction index display and adjustment knob completed this stand-alone portion of the instrument panel. The correction (КОРРЕКЦИЯ) knob consists of two parts. The upper part switches between three states Center, Right, and Left (С-средиий  П-правый  Л-левый). When C was selected center digit was changed, P the Right digit and L the left digit.  The lower part of the knob changes the direction of the numbered wheels’ rotation (НАПРАВЛЕНИЕ ВРАЩЕНИЯ) and adjusts smaller numbers (МЕНЬШЕ) corrections clockwise and larger number (БОЛЬШЕ) corrections counter clockwise.  The three digit window for the correction index sits above this two part knob.
This Globe device was built by OT or GKOT. There are four versions known: It is important to note that Vostok though Vostok-6 had either the IMP-1 or IMP-2 type globes during flight. Numerous labels have shown apparently surplus IMP-3 and IMP-4 Globus devices mounted in various instrument panels and presented as “Vostok”. IMP-1 (ИМП-1) (No Orbit Counter) IMP-2 (ИМП-2) Vostok-2 through 6 Flight Version (No Latitude/Longitude Indicator) IMP-3 (ИМП-3) with Latitude/Longitude Indicator, IMP-4 (ИМП-4) Voskhod Version (Variation to knob style and warning added to Orbit Counter Mechanism) This Globe device was powered by a small electric motor. With the exception of several diodes and the status indicator light, it was completely a mechanical device.

2. Combined Time Indicator -  (ИВК - индикатор временной комбинированный) or clock (at a glance looks like a gauge at the lower left of the instrument panel). This device is connected with Working Control of the Descent Regime (ПКРС — прибор контроля режима спуска) that controls the sequence of spacecraft functions prior to retrofire. There are two known types of this indicator readily distinguished by the number of adjustment knobs on the outside rim of this timepiece and the presence an additional secondhand at the 12:00 position. IVK-1 (ИВК-1) which flew on spacecraft Vostok-1 and 2 (and possibly 3 and 4) had two adjustments - one at 3:00 and one at 6:00. The later version (ИВК-2) had three adjustments and the additional secondhand and flew on Vostok-5, Vostok-6, and Voskhod. On the IVK-1 the Descent phase was marked on the rim as well as "I" at 0 minutes, "II" at  6 and a half minutes and "III" at 37 minutes with additional markings at 39, 44, and 51 minutes. These markings were related directly to events displayed in green on the signal table  (Табло сигнальные). The IVK was manufactured by the same design bureau that produced the IMP Globe Device -  “ОТ”.

3. Gauges (3) of the analog style adopted from the aviation industry. Each gauge has three displayed parameters. These include environmental conditions of the cabin and pressures in the orientation and retrorocket system. Each gauge is approximately 8cm in diameter. Left to Right:
Gauge 1: Indicator of Parameters of Atmosphere in the Cabin (ИПАК - Инднкатор параметров атмосферы в кабине)
1. Cabin Humidity (ДТЖ- датчики жидкости).(0 -100% with 30-70% normal limits)
2. Cabin Pressure (МДД - датчики давления),(0 to 1.5 Atmospheres with .5 to 1.3 Atmospheres within safe limits)
3. Cabin Temperature (ДТВ - датчики температуры воздуха) (0-40 Degrees Celsius) The last was unmarked for normal limits, but low temperatures below 12 C were considered problematic for the storage batteries or accumulator batteries.
Gauge 2: Indicator of the Composition of Cabin Air and Pressure in the Equipment Module. (ИСВД- Индикатор состава воздуха в кабине и давления в приборном отсеке)
1. Cabin Oxygen Composition (80-360 mmHg with 120-340 mm Hg considered normal)

4. Signal Table  (Табло сигнальные) For a complete and illustration look under the Signal Table Page Tab. The large green signal light above the globe device was labeled "Place of Landing" (МЕСТО ПОСАДКИ). Do not let the rare photo with Place of Flight (МЕСТО ПОЛОЖЕНИЯ) mislead you as this was but one display and official documentation verifies  МЕСТО ПОСАДКИ was indeed the correct notation. This would save power on a mission as well as the globe mode was normally for Place of Flight during the mission. 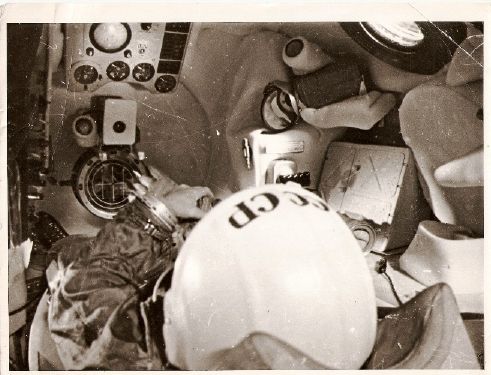 Contact Me with Questions or To Provide Additional Information

Thank you, your message has been sent